Back in the Swing of Things

Well Halifax was wonderful, I am so glad I went. We arrived late Friday afternoon, and headed straight to the pub. There was live music, and some decent pub grub, and a beautiful stout. I nearly cried. Ah, civilization.
While in Halifax I attended the Atlantic Craft Trade Show. It is the only wholesale trade show of its kind in Atlantic Canada. It was a beautiful show, the product was all Fine Craft, no mass produced goods at all. I took some seminars on trademark, and exporting to the US which was a good use of my time, but all in all, just being there, seeing the vendors, talking with them, and basically getting a feel for the wholesale trade. That was worth the trip. I  am planning on selling there next year.
This week has gone by so quickly, I am hardly catching my Breath. When we arrived home Monday afternoon, we immediately launched into Birthday party mode for my son. Sweet sixteen, and so handsome! Mason is a unique kid, funny, smart, and walks his own path in life. It is a good path.
Mason had only a couple of requests for his birthday. He wanted me to make him a hat, doable. He wanted a suit. Yup a suit. A la Barney Stinson, Mason wanted to Suit up (How I met Your Mother). I had told him that that was probably not gonna ever happen, due to the cost involved, and the lack of places for him to wear a suit in rural Cape Breton. 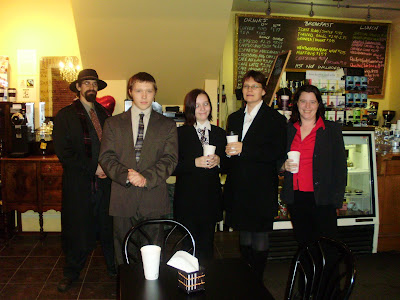 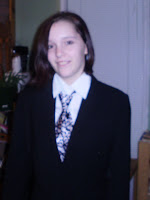 Now his father owns only one suit, got married, and divorced in it, will probably wear it to his next wedding, and get buried in it as well. I gave up suits when I gave up the office job at the museum several years ago. But that's what my boy wanted, so my friend Seonaid and I went to Louie's used clothing, buy one get one free day, and we all, yup, all of us suited up! Except my two year old neighbour, we tried but he kept "birthday suiting up" (naked babies did not get in the pictures), and his six year old sister Sophie, princess dressed it up.! A good time was had by all, the suiting up was a grand success.
Tuesday was spent shovelling out the kitchen after having left teenagers in charge for three days. I eventually found the counter, and managed to throw together a lesson plan for my Wednesday classes.

I was wiped out, Wednesday was such a long day, I didn't think it would ever end! My Classes were wonderful, but the weekend was catching up with me, the drive back from town was sooooooo, long. But when I got home I was really cheered by this: 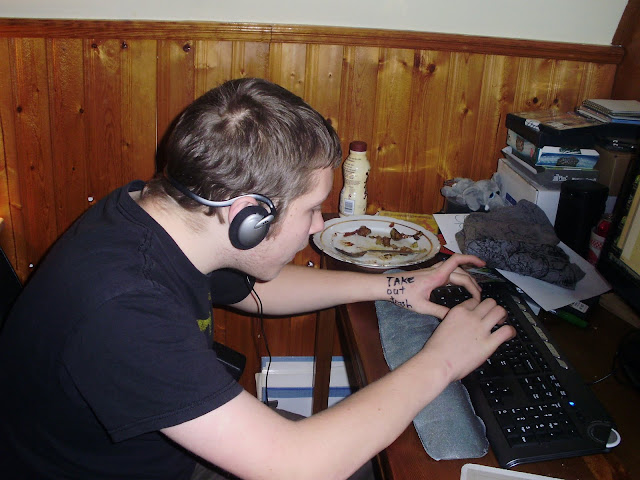 Mason entertained himself, not by playing games or chatting online, or even surfing youtube. Instead, he decided to learn German. He spent four hours online teaching himself a foriegn language. And baked me a chocolate cake. 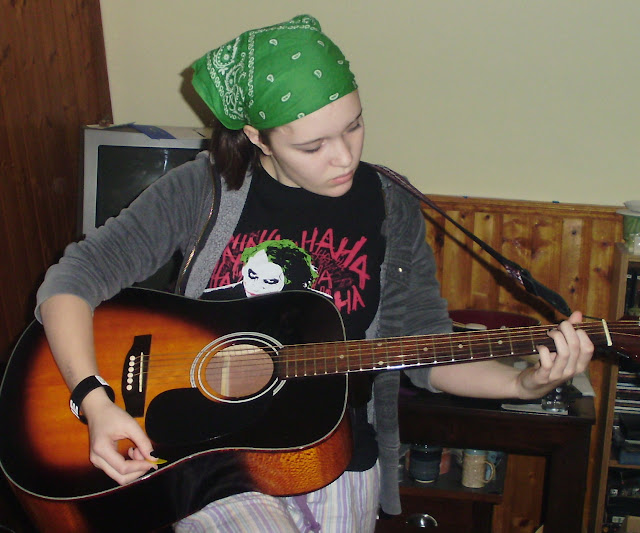 His sister, not to be outdone, went next door and borrowed a guitar, downloaded some lessons, and when I got home this is what she was doing. Last night they repeated the activities, she now knows enough cords to play the first half of her favourite Taylor Swift song. Mason is now throwing German words even at his speech therapist, who has pointed him in the direction of some german communities on the island.  Pretty smart, pretty independant, and pretty cool couple of kids. They make a mama proud.
Posted by Liz at 12:48 PM