What is Old, Is New Again.

All of these photos, and stories about my family filtering through my brain are starting to take on a life of their own. In the past two weeks I have learned so many interesting things, heard tall tales recounted by my Aunt Ann, originally told by my great Grandad Joseph Beck. Old stories, from the early 1900's, recorded by iphone in Fredericton, and sent by audiofile to Cape Breton. Technology is a wonderful thing.
Hearing my Aunt retell the tale of my Great grandad's dog chasing a Rabbit through a stone wall in England, brought back memories of my Nan telling me the same story when I was a small girl. I was quickly able to recall the story in its entirety, though my aunt had forgotton bits of it. 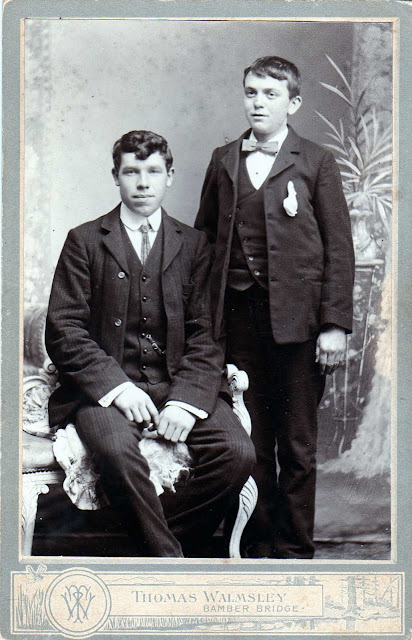 The rather serious looking young man  on the left in this picture, is my Great Grandfather Beck. It was he, who was apparently quite the character, telling tall tales to anyone who would listen. I think I would have liked this guy alot. It seemed he had a wild imagintaion, and a bit of a twisted sense of humour. I like to think he was a tad adventurous as well, moving his entire family to a brand new country and leaving everything he knew behind, starting a brand new life at 42, with a young wife and seven kids in tow. This man and his stories have inspired  some new ideas for me, I am not yet sure how they will manifest, be it in art pieces, or production work, but I just know its going to be exciting work either way. I can hardly wait to get started.
To make something new, and to honour those who came before me
Posted by Liz at 5:37 AM