Mad About Tea, a Tribute to My Nan 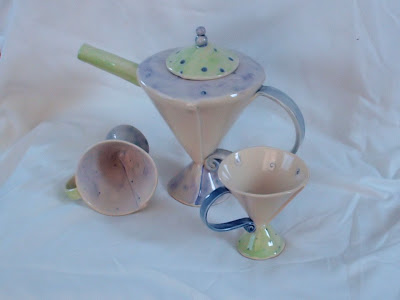 Growing up, I spent a great deal of time hanging out with my maternal grandmother. My nanny had one of those houses where the floor was so polished it was down right dangerous. If you got a good run on in the front sunporch,  you could slide straight through to the back door in one go. It was awesome. (And not encouraged.) There were all kinds of wonderful things at my Nan's house to keep a kid busy. I used to spend hours playing with the little china animal figures that came in the box of tea. and lay on my back looking at my mom's old viewmaster reels.
There were reels of the Queen's coronation, of the sites of London, and I believe there were reels of Snow White-but those were pretty creepy so I didn't look at those often. But the coolest thing about my Nanny visits had to be the tea.
At Nan's house you didn't throw a teabag in a cup and drink it while you did chores. At Nan's house tea was serious business.
Nan's tea involved plates of cookies arranged on the table, boiled eggs didn't come in a bowl, but were served in egg cups and  tea cups were warmed with boiling water before ever seeing a drop of tea. We sat round the table, and ate the best cookies in the world, drank Nanny's magic tea,and it was good.
My Nan had a glass teapot, it was nothing special, just a pyrex commercial teapot and she used regular tea, but she made the best tea in the world from those simple things.
Nan instilled a love of tea in most of her grandchildren. I think of her often when I am designing teapots. There is a little bit of my Nanny in each and every one of them.
Posted by Liz at 9:56 AM