Spring Break In Cape Breton= Impromptu Ceilidh on the Mira

Well, it’s that time of year again. March Break has hit our fair island, and with it, hoards of giggling girls have descended upon my place. The weather has been fantastic, and we made no extravagant plans for the break, so when India decided she would like to have a sleepover/bonfire party, I said sure! I am told there were only five, the photographic evidence does tend to agree with that number, but I swear at times it seemed that there were at least twenty of them.


Now when I was a girl, we had sleepovers all the time. We would lug our sleeping bags to someone’s rec-room, listen to music on our ghetto blasters, eat junk food and stay up all night playing silly games or telling creepy stories. Fingernails were painted, too much eyeliner applied, hair was styled in wacky ways. It was a blast, and an important right of passage. I wouldn't trade those times for the world.

India’s sleepover started pretty much like ours used to, the girls arrived with sleeping bags, and pillows. There was much giggling and chatting. The bonfire was pretty typical, a few roasted marshmallows, some spider dogs, and a lot of smoke. But this is where it morphed a bit and became something else. You see when I was having sleepovers; we tuned in to the radio, or listened to records, or the latest mix tape someone had made, or we watched “Friday Night Videos” on the TV.

Apparently in Cape Breton these things happen differently than in New Brunswick. With the bonfire out, the girls trudged up the stairs, and into India’s room. There was some pretty serious giggling happening, and then I heard some odd thumps, and bangs, and a guitar being plucked a bit. Then, the tunes began, the flute joined in and they were making their own music. Some of it was really good! Some was very beginner and the notes a bit sketchy, but it was all very enthusiastically played. They had their own little ceilidh. We were lacking a drum, and a fiddle, but we can work on that for next time. For this time we enjoyed a newly mastered (I use that term loosely) version of the classic Cape Breton tune "Song for the Mira" By India and Jocelyn, and some lovely spanish Music played and sung by Alee, who is an exchange student from Columbia. It was more fun than a barrel of monkeys!
And there was no lipstick, no hairspray, and very little junk food consumed. I approve, come back anytime girls!

Here are some pictures of the party girls, the morning after the impromptu jam session on the Mira 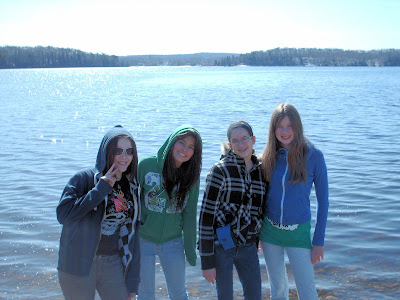 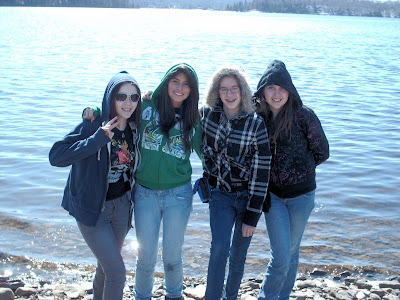 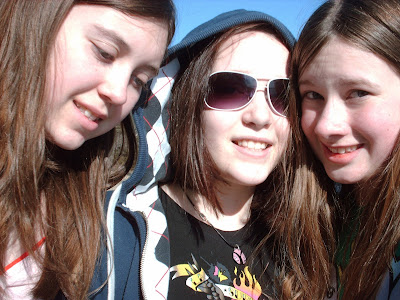