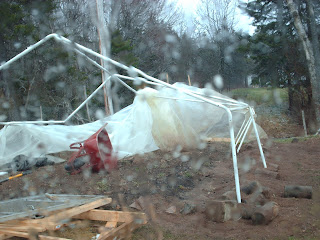 So yesterday, as I was just preparing to decorate some teabowls, Seonaid arrives at the door.
"When you get a minute," She says, "Can you give me a hand?"
Off I go down the stairs, and out the door to see that she has parked the van on the skirting of the greenhouse in an attempt to anchor it down in the wind. After a few minutes discussion we decide maybe we should replace the van with the cement blocks that are up at the back of the property.  Many wheelbarrow trips later, we secured the two long sides of the greenhouse with dozens of cement things. Wedged them in with dirt, and moved the van off of the plastic. It was cold brutal windy work.The greenhouse was acting like a giant angry bird flapping its wings in our face, snow was stinging our faces and the cement things were slimy and muddy. But we got it done. All was good, the plastic stayed where it was supposed to and Seonaid went off to work, leaving her greenhouse under my watchful eye.
And the wind changed.
Thats where it all went south. Or North or what ever damned direction it took to fling the many cement bits and pieces willy nilly about the yard in a deadly shower of heavy slimy mudcaked missiles, and create a giant kite out of the greenhouse. I tried in vain to hold the corner down so I could release the plastic from the frame and the wind lifted me and tossed me about. Somewhat worried I might end up in OZ, I let go of the greenhouse and attempted to call in reinforcements. Alas, none were to be found.
When the kids got home from school, Mason helped me cut the tape and release the plastic so that it didn't tear to shreds, or fling the frame about any more than it already had. By this time though the frame was bent beyond redemption. I was pretty tired, and sad, and sore.
We learned a few things in the process of the great greenhouse debacle. Not the least of which is that we wasted a good chunk of money on education. With a combined total of well more than a decade of expensive post secondary education, including at least one graduate degree between us, the best swear word we could come up with during the whole crisis was f**k a doodle doo.
Maybe we should have just gone to Hank's House a Learnin' instead of University!
Posted by Liz at 5:55 AM